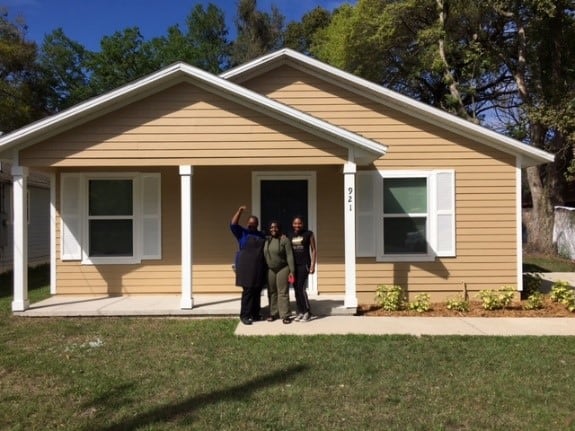 When Latoya applied to become a Habitat for Humanity of Greater Orlando Homeowner she was sleeping in a makeshift bed in her living room so her children could share the bedroom. She is a single mother of two teenage daughters, LaPrecious (17) and Amari (15), and one son. Her son, Javonte (20), recently joined the military to serve our country.

Latoya and her children had been homeless twice before, and she profoundly comprehends the importance of living in a safe, stable environment. She was motivated to become a homeowner because she wanted her children to realize the value and joys of homeownership.

When the Homeowner Selection Committee visited her living conditions prior to her approval, she showed them her vision board. It contained a collage of designs and decorations for her ideal home. With encouragement from the committee, she decided to keep it out in the open to give her daily motivation.

The process was long, but she vowed to dedicate extra work to complete her sweat equity hours and homeownership classes quickly. The typical process takes more than a year to complete. Latoya completed the process in about 10 months.

During the process, she wanted to be an example for her children. “You don’t stop because things get bad,” she said. “The situation is only temporary. You have to go through it to get to the other side.”

Latoya became a Habitat Greater Orlando Homeowner on March 2, 2018. She feels like she’s living a dream – one that she’s happy became a reality. After going through the process herself, she wants to give back and help future homeowners by hopefully becoming a part of the Homeowner Selection Committee. She hopes that her story inspires others to pursue their dreams of homeownership.