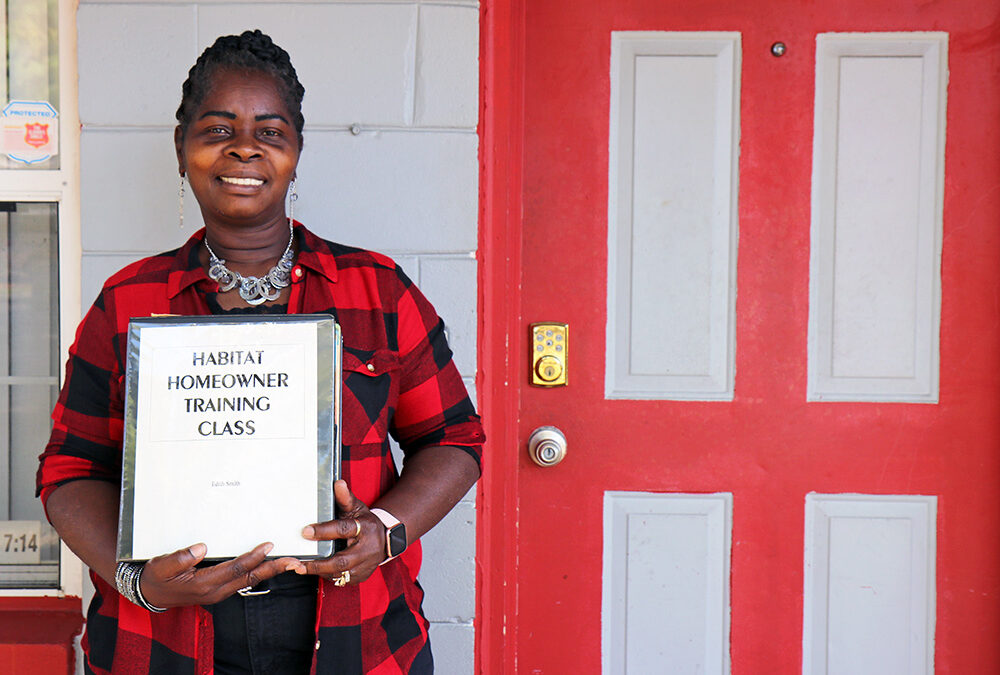 Habitat Orlando & Osceola is celebrating 35 years of building homes and changing lives in Central Florida. In this special series, we’re checking in with longtime homeowners to see how owning their own Habitat home has had a ripple effect on their lives. Visit our 35th-anniversary page for more >

Habitat for Humanity Greater Orlando & Osceola County homeowner Edith’s husband likes to tease her about her tendency to keep all sorts of mementos.

One of Edith’s treasured keepsakes is her Habitat Homeownership Training Class binder. Edith graduated from those classes, which are now called Habitat U, in 2000. She still has all her coursework – which she refers to sometimes, especially for home maintenance tips.

Edith also has her Habitat diploma and the notecards she used for her graduation speech.

“Being a homeowner has always been a dream for me,” Edith wrote in her speech. “And I thank God that He and Habitat are making my dream come true.”

Edith has been living that dream for about 20 years now as a homeowner in the Holden Heights area.

“I love being a homeowner because (my home) is mine. It’s something that belongs to me. I take pride in it,” she said.

Edith’s sister, who is also a Habitat homeowner, first encouraged her to apply. At the time, Edith was a single mom living in an Orlando Housing Authority apartment.

She could have stayed living in that apartment. It was a comfortable living, but she wanted more.

“I wanted to have something of my own. Habitat allowed me to do that. They didn’t just put me out there, they walked beside me, they walked me through my journey.”

Edith’s credit wasn’t up to par when she first applied, but Habitat Orlando & Osceola helped her correct it. When Edith learned she’d been accepted, she shouted for joy.

“When God is on your side, He will make things happen,” Edith said.

When she was accepted in Habitat Orlando & Osceola’s homeownership program, Edith was a single mother to twins with another child, her youngest son, on the way.

“You have to want something better for yourself and something to leave for your children,” Edith said.

She wanted her children to understand the homebuying process, so Edith brought them to a build site to watch construction and later involved them in decorating their own Habitat home.

At the time, Habitat Orlando & Osceola homeowners needed to complete 500 sweat equity hours. Edith ended up working 506 ½ hours by the end of her journey. Future homeowners would work on other Habitat houses being built, from building the walls to raising the roof.

The encouragement Edith received from Habitat staff as well as that drive to own something of her own helped keep her on the path to homeownership. Edith finally purchased her home in 2001.

“I didn’t stop the blessing with me,” Edith said.

Edith has enjoyed the security and pride that comes with homeownership – along with her husband Marvin of 11 years, her home will soon be paid off.

“My journey wasn’t easy, but it was worth it.”